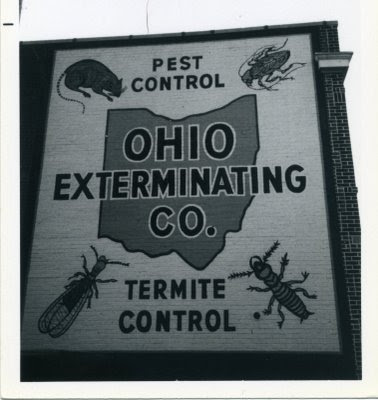 I dwelled in the Land Of Nod for nine of the longest years of my life, ages eleven through twenty, the defiant years when corpuscles go berserk. My personal Biblical banishment was to the top right corner of Ohio, whose entire northern border skirts the mysterious Lake Erie, shallowest and stormiest of the Great Lakes. In my day, it was also the most polluted of the fab five, and I loved it dearly. I was eleven old when my family relocated from Canada to the isolated watery burg of Ashtabula, which sits fifty miles east of Eden-- Cleveland, that is, and two hours as the crow flies from Pittsburgh. Even then, in 1967, it was in decay, a far cry from what Jack Kerouac may have seen when he namedropped A-Town in On The Road, or what Bob Dylan might have been referring to when he scribbled it into You're Gonna Make Me Lonesome When You Go, not to mention how it was when its most fabulous and famous ex-pat, Maila Nurmi- Vampira- was growing up there, when Ashtabula was still a clean, green port town with a pretty Main Street and a bustling neighboring tourist mecca called Geneva-On-The-Lake.
But, we still had the lake, just down a sandy lane that dead-ended at the beach head, and aside from lots of smelly dead carp and an occasional unidentified floater, we never really noticed that it was turning into one really big, sick overgrown pond. All summer long we'd play in that beloved, beguiling, semi-cesspool until our fingers and toes were pruney, noses burnt to peeling for the season. My sister Helen and brother Jack and I lived with our parents, our super great dog Fluffy and an elderly great-aunt Kate, who checked out rather unceremoniously on the occasion of my sweet sixteenth birthday, which I was celebrating with little pomp and zero circumstance, home alone with Helen and Fluffy. As fate would have it, it was future Cramps manager Char Rau's mortician dad, who would hearse on over in the middle of that cold October night to do his thing.

Char was super cool. Although the Amboy Dukes were officially the first national hitmakers I'd seen (my brother's fraternity, Delta Psi Omega, had brought the Dukes to town), Char had shlepped me to Cleveland to the big WIXY rock n roll fest a year earlier, and in general, let me hang around her slightly older, cooler crew. I hoped that my big hepster contest win in '71 had earned me some brownie points with her rat pack-- I'd sent in my recurring narcoleptic dream to the widely advertised WNCR (hep Cleveland rock station) Pink Floyd Dream Contest and had won one of ten complete sets of PF albums-- plus the boss jocks had read my dream read over the air to a PF soundtrack. Hey, this is big stuff when you're 15. (Crazy thing is, I contacted Cleveland radio historian Mike Olszewski this year, totally on a hunch, and he send me a dub of whole darn radio contest. It was somewhere in their archives. Most peculiar!) 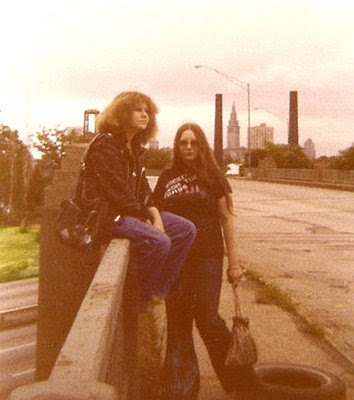 (left: me and Becky, Cleveland skyline in background, featuring the fabulous Terminal Tower!)
Helen and I took off for England when she graduated from KSU in '73, a story in itself-- two gals galavanting all over the United Kingdom in quest of excitement and loud sounds! Without bogging down the blog at this juncture, let's jump back to the States, a year of factory work, and the move down to Kent in '74. By now I'd abandoned WNCR for WMMS, and one Sunday night in April of '75, I tuned into a new show called Local Color. A band called Rocket From The Tombs was clanging away and I thought they were the greatest. They were promoting a show opening for Left End, who were quite awful. But Rocket was amazing. Extremely loud and um, purpose driven. They did a Velvet Underground song (Foggy Notion!) and an MC5 Song (Sister Ann!) and a bunch of incredible originals which sounded like a cross between the Velvets and the Five, with an added ingredient that only being from Cleveland could provide. I could not believe an area band could be good-- better-- than the known national and international groups that were making noise. 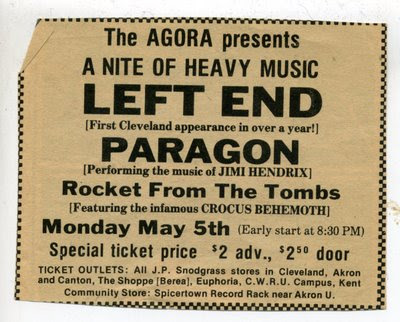 I sat right down and wrote a letter to them at something called the Black Orchid Society, at the address they announced on the radio, and got a six page letter back from their guitar player, Peter Laughner, describing the band and their plan to make a 45: "Most likely Garland Jeffrey's Wild In The Streets for an A-side and out own Final Solution on the B. Streets has got that anthem quality, plus being a great neglected single that was two years ahead of its time and ill promoted." Here's a page describing the ramped up line up. 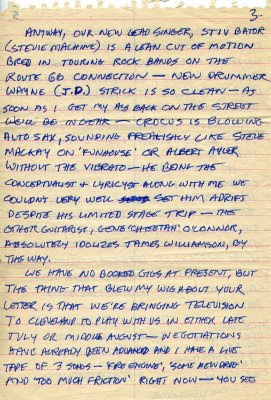 I became good pals with Peter and with Crocus Behemoth, as well. One or the other would drop by regularly to play records and yap and read fanzines. Becky L. was one of my best friends in Kent, a serious Stooges fan, but a true nut for Rocket as well. We hand painted fan club teeshirts with acylic paints and stencils and donned them as our uniforms whenever RFTT played, which honestly wasn't often enough. To us, they were world class. There was a pack of great fan pals at that time, including Heidi, a gorgeous gal from Massillon with waist length hair (jeez, how she cried when her idol Marc Bolan sauntered onstage in a space suit, fat as a house), Dyan (who had some kind of good witch psychic powers and a car), Michelle (lovely lass, but who lost all our favor when she went Springsteen), Michael the hairdresser, plus a mess of guys and gals who were always ready to roll. As for locales in Cleveland and the area, the big big shows were at the Public Auditorium, the big shows were at the Allen Theatre, and little big shows were at the Agora, and anything else was at the Viking Saloon. Then, there was the Piccadilly Inn on 30th and Euclid, which was where Rocket would open for Television on July 24. In letters, Peter describes in detail how he had met with Tom Verlaine and had managed to persuade him to come to Cleveland. Here's one of several great snaps of the late, great Rocket From The Tombs, taken by my sister Helen. More to come. (From left: Peter, Craig Bell, Wayne Strick, Gene O'Connor, Crocus Behemoth. Amen!) 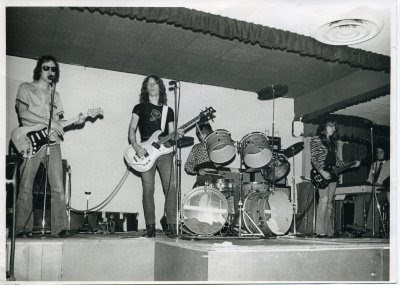 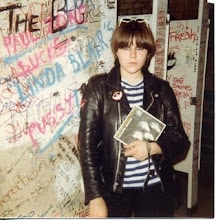